Queerying 5th after Pentecost A 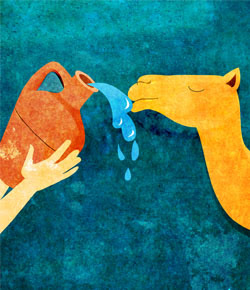 “I am Abraham’s servant,” Eliezer began. “The Becoming One has greatly blessed my employer, and he has become rich: Xe has given him sheep and cattle, silver and gold, servants of many genders, camels and asses. And Sarah, my employer’s wife, bore my employer a son in her old age, and he has assigned to him everything he owns. Now my employer made me swear, saying, ‘You shall not get a wife for my son from the daughters of the Canaanites in whose land I dwell; but you shall go to my father’s house, to my kindred, and get a wife for my son.’
[...]
“I came today to the spring, and I said: O Becoming One, God of my employer Abraham, if You would indeed grant success to the errand on which I am engaged! As I stand by the spring of water, let the young woman who comes out to draw and to whom I say, ‘Please, let me drink a little water from your jar,’ and who answers, ‘You may drink, and I will also draw for your camels’—let her be the wife whom the Becoming One has decreed for my employer’s son.’ I had scarcely finished praying in my heart, when Rebekah came out with her jar on her shoulder, and went down to the spring and drew. And I said to her, ‘Please give me a drink.’ She quickly lowered her jar and said, ‘Drink, and I will also water your camels.’ So I drank, and she also watered the camels. I inquired of her, ‘Whose daughter are you?’ And she said, ‘The daughter of Bethuel, son of Nahor, whom Milcah bore to him.’ And I put the ring on her nose and the bands on her arms. Then I bowed low in homage to the Becoming One and blessed the Becoming One, the God of my employer Abraham, who led me on the right way to get the daughter of my employer’s brother for his son. And now, if you mean to treat my employer with true kindness, tell me; and if not, tell me also, that I may turn right or left.”
[...]
They called Rebekah and said to her, “Will you go with this man?” And she said, “I will.” So they sent off their sister Rebekah and her nurse along with Abraham’s servant and his men. And they blessed Rebekah and said to her, “O sister! May you grow into thousands of myriads; May your offspring seize the gates of their foes.” Then Rebekah and her maids arose, mounted the camels, and followed the man. so the servant took Rebekah and went his way. Isaac had just come back from the vicinity of Beer-lahai-roi, for he was settled in the region of the Negeb. Isaac went out walking in the field toward evening and, looking up, he saw camels approaching. Raising her eyes, Rebekah saw Isaac. She alighted from the camel and said to the servant, “Who is that man walking in the field toward us?” And the servant said, “That is my employer.” So she took her veil and covered herself. The servant told Isaac all the things that he had done. Isaac then brought her into the tent of his mother Sarah, and he took Rebekah as his wife. Isaac loved her, and thus found comfort after his mother’s death.
Queeries for the text:
What's missing?
What parts of this pericope might be objected to today? Why?
What's wrong with the women of Canaan?
What kinds of labor are valued or devalued?
What is the significance of a nose ring?
How is consent valued?
Why does he take Rebekah to Sarah's tent?
-----
Rev. Emily E. Ewing and River Needham, M.A. queery the Gospel reading. 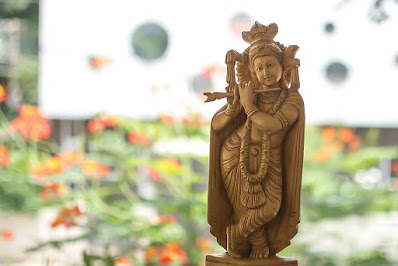 Gospel: Matthew 11:16-19, 25-30
Jesus said:
16“But to what will I compare this generation? It is like young ones sitting in the marketplaces and calling to one another, 17‘We played the flute for you, and you did not dance; we wailed, and you did not mourn.’ 18For John came neither eating nor drinking, and they say, ‘He has a demon’; 19the Human One came eating and drinking, and they say, ‘Look, a glutton and a drunkard, a friend of tax collectors and sinners!’ Yet wisdom is vindicated by her deeds.”
20Then he began to reproach the cities in which most of his deeds of power had been done, because they did not repent. 21“Woe to you, Chorazin! Woe to you, Bethsaida! For if the deeds of power done in you had been done in Tyre and Sidon, they would have repented long ago in sackcloth and ashes. 22But I tell you, on the day of judgment it will be more tolerable for Tyre and Sidon than for you. 23And you, Capernaum, will you be exalted to heaven? No, you will be brought down to Hades. For if the deeds of power done in you had been done in Sodom, it would have remained until this day. 24But I tell you that on the day of judgment it will be more tolerable for the land of Sodom than for you.”
25At that time Jesus said, “I thank you, Parent, Boss of heaven and earth, because you have hidden these things from the wise and the intelligent and have revealed them to infants; 26yes, Parent, for such was your gracious will. 27All things have been handed over to me by my Parent; and no one knows the Child except the Parent, and no one knows the Parent except the Child and anyone to whom the Child chooses to reveal Xem.
28“Come to me, all you that are weary and are carrying heavy burdens, and I will give you rest. 29Take my yoke upon you, and learn from me; for I am gentle and humble in heart, and you will find rest for your souls. 30For my yoke is easy, and my burden is light.”
Queeries for the text:
What's missing?
What are young ones doing without response today?
How are behaviors being policed?
What literary and rhetorical devices are at play in the woes?
What are the sins of Sodom?
What does rest feel like?
Who calls us to rest today?
What are your queeries?