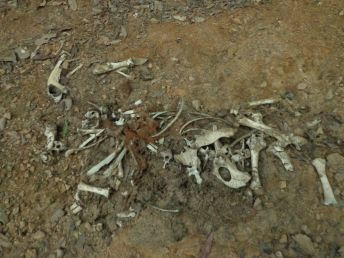 Tanakh: Ezekiel 37:1-14
The hand of the Becoming One came upon me. They took me out by the spirit of the Becoming One and set me down in the valley. It was full of bones. They led me all around them; there were very many of them spread over the valley, and they were very dry. They said to me, “O mortal, can these bones live again?”

I replied, “O Becoming God, only you know.”

Then, They said to me, “Prophesy over these bones and say to them: O dry bones, hear the word of the Becoming One! Thus said the Becoming God to these bones: I will cause breath to enter you and you shall live again. I will lay sinews upon you, and cover you with flesh, and form skin over you. I will put breath into you, and you shall live again. Then, you shall know that I am the Becoming One!” I prophesied as I had been commanded. While I was prophesying, suddenly there was a sound of rattling, and the bones came together, bone to matching bone. I looked, and there were sinews on them, and flesh had grown, and skin had formed over them; but there was no breath in them.

Then They said to me, “Prophesy to the breath, prophesy, O mortal! Say to the breath: Thus said the Becoming God: Come, O breath, from the four winds, and breathe into these slain, that they may live again.” I prophesied as They commanded me. The breath entered them, and they came to life and stood up on their feet, a vast multitude.

They said to me, “O mortal, these bones are the whole House of Israel. They say, ‘Our bones are dried up, our hope is gone; we are doomed.’ Prophesy, therefore, and say to them: Thus said the Becoming God: I am going to open your graves and lift you out of the graves, O my people, and bring you to the land of Israel. You shall know, O my people, that I am the Becoming One, when I have opened your graves and lifted you out of your graves. I will put my breath into you and you shall live again, and I will set you upon your own soil. Then you shall know that I, the Becoming One, have spoken and have acted”—declares the Becoming One.

Queeries for the text:
What memories does this text bring up?
What time of year do we see bones in the United States?
How can bones hear?
How can bones breathe?
How can the dead live again?
What are the four winds?
Where are we doomed? Where is there hope?
What about the Becoming One allows them to do these things?
Why does the Becoming One speak in the third person?

Gospel: John 11:1-45
Now a certain man was ill, Lazarus of Bethany, the village of Mary and her sister Martha. 2Mary was the one who anointed the Commander in Chief with perfume and wiped his feet with her hair; her brother Lazarus was ill. 3So the sisters sent a message to Jesus, “Commander in Chief, he whom you love is ill.”

4But when Jesus heard it, he said, “This illness does not lead to death; rather it is for God’s glory, so that the Divine One may be glorified through it.” 5Accordingly, though Jesus loved Martha and her sister and Lazarus, 6after having heard that Lazarus was ill, he stayed two days longer in the place where he was. 7Then after this he said to the disciples, “Let us go to Judea again.”

8The disciples said to Jesus, “Rabbi, the Judeans were just now trying to stone you, and are you going there again?”

12The disciples said to Jesus, “Commander in Chief, if he has fallen asleep, he will be all right.” 13Jesus, however, had been speaking about his death, but they thought that he was referring merely to sleep.

14Then Jesus told the disciples plainly, “Lazarus is dead. 15For your sake I am glad I was not there, so that you may believe. But let us go to him.”

16Thomas, who was called the Twin, said to his fellow disciples, “Let us also go, that we may die with him.”

17When Jesus arrived, he found that Lazarus had already been in the tomb four days. 18Now Bethany was near Jerusalem, some two miles away, 19and many of the Judeans had come to Martha and Mary to console them about their brother. 20When Martha heard that Jesus was coming, she went and met him, while Mary stayed at home. 21Martha said to Jesus, “Commander, if you had been here, my brother would not have died. 22But even now I know that God will give you whatever you ask of Them.”

23Jesus said to her, “Your brother will rise again.”

24Martha said to Jesus, “I know that he will rise again in the resurrection on the last day.” 25Jesus said to her, “I am the resurrection and the life. Those who believe in me, even though they die, will live, 26and everyone who lives and believes in me will never die. Do you believe this?”

27Martha said to Jesus, “Yes, Commander, I believe that you are the Messiah, the Divine One, the one coming into the world.” 28When she had said this, she went back and called her sister Mary, and told her privately, “The Teacher is here and is calling for you.” 29And when she heard it, she got up quickly and went to Jesus.

30Now Jesus had not yet come to the village, but was still at the place where Martha had met him. 31The Judeans who were with Mary in the house, consoling her, saw Mary get up quickly and go out. They followed her because they thought that she was going to the tomb to weep there. 32When Mary came where Jesus was and saw him, she knelt at his feet and said to him, “Commander, if you had been here, my brother would not have died.”

33When Jesus saw Mary weeping, and the Judeans who came with her also weeping, he was greatly disturbed in spirit and deeply moved. 34Jesus said, “Where have you laid him?”

They said to Jesus, “Commander in Chief, come and see.”

36So the Judeans said, “See how Jesus loved Lazarus!” 37But some of them said, “Could not the one who opened the eyes of the blind man have kept this man from dying?”

38Then Jesus, again greatly disturbed, came to the tomb. It was a cave, and a stone was lying against it. 39Jesus said, “Take away the stone.”

Mary, the sister of the dead man, said to Jesus, “Commander, already there is a stench because he has been dead four days.”

40Jesus said to Martha, “Did I not tell you that if you believed, you would see the glory of God?” 41So they took away the stone. And Jesus looked upward and said, “Papa, I thank you for having heard me. 42I knew that you always hear me, but I have said this for the sake of the crowd standing here, so that they may believe that you sent me.” 43When Jesus had said this, he cried with a loud voice, “Lazarus, come out!” 44The dead man came out, his hands and feet bound with strips of cloth, and his face wrapped in a cloth. Jesus said to them, “Unbind him, and let him go.”

45Many of the Judeans therefore, who had come with Mary and had seen what Jesus did, believed in him.

Queeries for the text:
What sort of family dynamics are going on with three adult siblings living together?  Are they really "siblings", two sisters and a brother?
With whom does Thomas want to die?
How did Jesus love Lazarus?  What kind of love was it?
Who are the ones who believe in the resurrection?
What prompts weeping today?
How are we entombed?  How is this a tomb?  How might it be a womb?
What is in need of binding?  What is being bound?
What is in need of unbinding?  What is being unbound?
How can you come out?