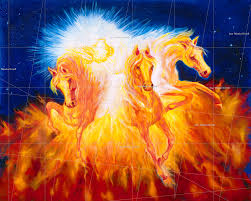 Elijah said to him, “Stay here, for the Becoming One has sent me on to the Jordan.”
“As the Becoming One lives and as you live, I will not leave you,” he said, and the two of them went on.
Fifty men of the disciples of the prophets followed and stood by at a distance from them as the two of them stopped at the Jordan. Thereupon Elijah took his mantle and, rolling it up, he struck the water; it divided to the right and left, so that the two of them crossed over on dry land. As they were crossing, Elijah said to Elisha, “Tell me, what can I do for you before I am taken from you?”
Elisha answered, “Let a double portion of your spirit pass on to me.”
“You have asked a difficult thing,” he said. “If you see me as I am being taken from you, this will be granted to you; if not, it will not.”
As they kept on walking and talking, a fiery chariot with fiery horses suddenly appeared and separated one from the other; and Elijah went up to heaven in a whirlwind. Elisha saw it, and he cried out, “Oh, father, father! Israel’s chariots and horsemen!” When he could no longer see him, he grasped his garments and rent them in two. He picked up Elijah’s mantle, which had dropped from him; and he went back and stood on the bank of the Jordan. Taking the mantle which had dropped from Elijah, he struck the water and said, “Where is the Becoming One, the God of Elijah?” As he too struck the water, it parted to the right and to the left, and Elisha crossed over.

Queeries for the text:
Which other stories is this reminiscent of?
Does God play hide and seek?
Why is the trip from Bethel to Jericho omitted from the pericope?
How does God speak in this passage? What does God look like?
What is a mantle?
Is God's existence dependent on each person? How is Elisha's experience of God different from Elijah's? What are the theological implications?
Who could the false prophets be today?
Where else do prophets strike water? 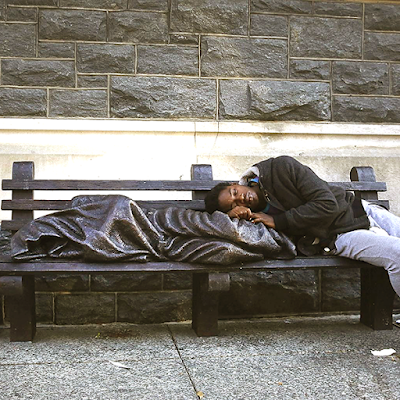 he set his face to go to Jerusalem.
52And he sent messengers ahead of him.
On their way they entered a village of the Samaritans
to make ready for Jesus;
53but they did not receive him,
because his face was set toward Jerusalem.
54When the disciples James and John saw it,
they said, “Master, do you want us to command fire
to come down from heaven and consume them?”
55But Jesus turned and rebuked them.
56Then they went on to another village.

57As they were going along the road,

Queeries for the text:
How do you set your face?
Which messengers did Jesus send?
Why do James and John want to command terrible weather?
Why are we so inclined towards increased vengeance?
Did the "someone" know what they were proposing?
What is it like for Jesus to be without home
How does Jesus feel about family?
What happens when you look back while plowing?  What if you want to plow in a curve?