Queerying 12th after Pentecost A 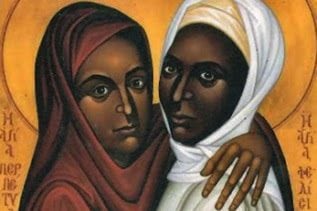 A new king arose over Egypt who did not know Joseph, and the king said to his people, “Look, the Israelite people are much too numerous for us. Let us deal shrewdly with them, so that they may not increase; otherwise in the event of war they may join our enemies in fighting against us and rise from the ground.”

The king of Egypt spoke to the Hebrew midwives, one of whom was named Shiphrah and the other Puah, saying, “When you deliver the Hebrew women, look at the birthstool: if it is a boy, kill him; if it is a girl, let her live.”


The midwives said to Pharaoh, “Because the Hebrew women are not like the Egyptian women: they are vigorous. Before the midwife can come to them, they have given birth.”
God dealt well with the midwives; and the people multiplied and increased greatly. Since the midwives feared God, They established households for them. Then Pharaoh charged all his people, saying, “Every boy that is born you shall throw into the Nile, but let every girl live.”
A certain man of the house of Levi went and married a Levite woman. The woman conceived and bore a son; and when she saw how beautiful he was, she hid him for three months. When she could hide him no longer, she got a wicker basket for him and caulked it with bitumen and pitch. She put the child into it and placed it among the reeds by the bank of the Nile. His sister stationed herself at a distance, to learn what would befall him. The daughter of Pharaoh came down to bathe in the Nile, while her maidens walked along the Nile. She spied the basket among the reeds and sent her slave girl to fetch it. When she opened it, she saw that it was a child, a boy crying. She took pity on it and said, “This must be a Hebrew child.”
Then his sister said to Pharaoh’s daughter, “Shall I go and get you a Hebrew nurse to suckle the child for you?”
Pharaoh’s daughter answered, “Yes.”
So the girl went and called the child’s mother, and Pharaoh’s daughter said to her, “Take this child and nurse it for me, and I will pay your wages.” So the woman took the child and nursed it. When the child grew up, she brought him to Pharaoh’s daughter, who made him her son. She named him Moses, explaining, “I drew him out of the water.”
Queeries for the text:
What did Joseph do for Pharaoh? (What did we miss last week?)
What are the rights of immigrants in the u.s.?
Who are the Shiprah's and Puah's of today? Who is Pharaoh in this analogy? What are the orders?
What life is found in the River today?
What should we be looking out for as we work for freedom for the whole human family?
What parts of the story do we miss when we read in translation?
-----

13Now when Jesus came into the district of Caesarea Philippi, he asked his disciples, “Who do people say that the Human One is?”

14And the disciples said, “Some say John the Baptist, but others Elijah, and still others Jeremiah or one of the prophets.”

16Simon Peter answered, “You are the Messiah, the Offspring of the living God.”

17And Jesus answered him, “Blessed are you, Simon son of Jonah! For flesh and blood has not revealed this to you, but my Father in heaven. 18And I tell you, you are Peter, and on this rock I will build my church, and the gates of Hades will not prevail against it. 19I will give you the keys of the dominion of heaven, and whatever you bind on earth will be bound in heaven, and whatever you loose on earth will be loosed in heaven.”

20Then Jesus sternly ordered the disciples not to tell anyone that he was the Messiah.

Queeries for the text:
Who do people say is human?
Who do people say the Human One is?
Who is revealing humanity and divinity today?
Why are names important? How is naming powerful?
Why doesn't Jesus want the disciples to tell anyone?
What are your queeries?